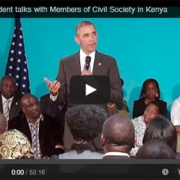 WIIS-HOA president, Ms. Fauziya Abdi Abdi, speaks about empowering women to counter violent extremism with the President of the United States during the POTUS’s hallmarked visit to Kenya. The video belongs solely to the White House and WIIS Global does not own or claim the rights to this video. 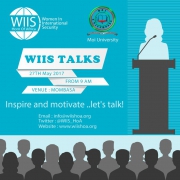 WIIS – TALKS is a project aimed at inspiring and motivating young people from Kenya through use of role models who have successfully championed positive ideas and initiatives within society.

The activity is carried out through use of symposiums where identified speakers provide a continuous story format presentation of their topic, to inspire young people attending the symposium. The symposium is open to the public especially community members giving an opportunity for the speaker to share their story to a wider audience.

WISE Talks is coordinated by Women In International Security, as it is a central part of the networking used by the organization to offering young people an opportunity to learn and interact with various key members of society in a bid to re-shape attitudes, promote critical thinking in turn building resilience towards negative engagements such as violence. 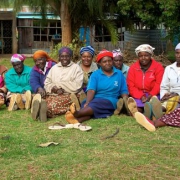 International actors from the United Nations to the European Union are increasingly recognizing the role of women and women’s organizations in efforts to counter and prevent violent extremism. Still, much of the international debate focuses on the small number of women who join violent extremist groups, rather than the women who prevent violent extremist groups from taking hold in their communities. To support this work and sever extremist groups’ recruiting pipeline, prevention efforts by local or national authorities must engage women in a way that meaningfully addresses gender inequality and popular mistrust of police.

The Kenyan government is strongly committed to women’s empowerment, especially ensuring women’s participation in power structures and decision-making. But this doesn’t fully extend to issues of security. Despite the growing number and visibility of women both preventing and perpetrating terrorist acts—as recently as September 2016, the terror group al-Shabab deployed three women to attack a Kenyan police station—the Kenyan National Strategy on Counter Violent Extremism, launched in September 2016, is silent on how to engage women and women’s organizations. The strategy includes nine pillars, ranging from media engagement to education and security, yet it does not account for women’s roles in prevention efforts.

The Kenyan National Action Plan (KNAP) for the implementation of the United Nations Security Council Resolution 1325, which reaffirms the vital role of women in the prevention and resolution of conflicts, is also lacking. The KNAP, aptly titled “Kuhusisha Wanawake ni Kudumuisha Amani” (involving women is to sustain peace), focuses on prevention of violence, protection of women, participation of women in decision-making, and promotion of women’s efforts in relief and recovery efforts. Although the KNAP acknowledges in its introduction the threat posed by radicalization and violent extremism, it pays little attention to women’s roles in this phenomenon, whether as perpetrators of violence or agents of prevention.

These are critical gaps; understanding gender dynamics is particularly important when dealing with religious fundamentalist groups. Though these groups subscribe to an extreme view of patriarchy and subservience of women, they also exploit prevailing gender inequalities in Kenyan society to entice women to become members—only to enslave the women once they arrive. As we have seen in Kenya, women who are preyed upon by extremists can easily become passive—if not active—enablers of their violent ideologies.

Women are also pushed toward these groups by heavy-handed security crackdowns, such as the 2014 “Usalama watch,” a counterterrorism operation aimed at detecting, deterring, and disrupting terrorism. In July 2014, a damning report by the Independent Oversight Policing Authority documented gross brutality and human rights abuses under Usalama Watch, which exacerbated many people’s feelings of marginalization and discrimination. These practices compound the existing mistrust between police and communities, undermining prevention programs that aim to increase community engagement in countering violent extremism.

Caught between violent extremism and security crackdowns, one group of women decided it was time to break this cycle by working with women and police at the local and national levels. Sisters Without Borders, chaired by Women In International Security Horn of Africa, is a platform that convenes women from different parts of Kenya to promote greater understanding of gender inequalities at the socio-economic and political levels, as well as socially constructed gender roles, behaviors, expectations, and attributes. With support from United States Institute of Peace, members of Sisters Without Borders organized a series of dialogues with community leaders, police, and policymakers from the northeast, the coast, and the capital, where violent extremism is particularly acute.

A key conclusion drawn from these discussions is that women’s empowerment is an important tool for stabilizing the country. Most women want to protect their children and communities from brutal law-enforcement interventions, so they convince themselves that the radicalization of their children is legitimate. Many voiced concerns for their children’s safety, citing frequent arrests for what they alleged were “unsubstantiated” reasons. They agreed that while some community members harbor criminals, police also falsified information and reports to arrest innocent people. Yet given the opportunity, many of these same women were willing to engage with state and police officials, especially if efforts were made to effectively address the gender inequalities that keep them dependent on the very family members being radicalized. Some of their households depend on funds provided by terrorist recruiters. Other women journey to join extremist groups, lured by the prospect of financial gain.

These dialogues proposed measures to bridge the gap between women and local authorities, including exchange programs between regions and groups that provide women with the knowledge and support to address security issues within their communities. Some women suggested relationship-building activities, such as soccer matches with police and joint community clean-ups. Many were grateful when security actors agreed to discuss their proposals. But above all, the dialogue participants identified the need for confidentiality and protection of information. In the county of Garissa, for example, appointments of an impartial third party—an ombudsperson—have helped address this. Ombudspeople can serve as mediators between the two sides and even interpreters where a language barrier exists. Women also cited the need for more women on security committees, such as the Nyumba Kumi (Ten Houses) Initiative, which organizes community policing in small household clusters based on residents’ security needs.

Dialogues such as these can be a powerful catalyst for local action. But to effectively prevent violent extremism, their effects must extend to the state and international levels. Just as gender inequality hinders prevention efforts, a gender analysis of the causes and motivations of those joining violent extremist groups will shed light on wider array of policy tools that can help fight this scourge. These policies must be inclusive; women must participate in the formulation of policies that affect them, as well as the programs that are already underway.

As Kenya moves forward in implementing the two key policies in prevention of extremism, KNAP and the National Strategy, it is important to develop an action plan that links the two. This plan must clearly identify how women and civil society can meaningfully participate in efforts to prevent extremism in the family, in communities, and across the nation. Sisters Without Borders stand ready to become full and worthy partners in this endeavor.

Fauziya Ali is an expert in preventing and countering violent extremism (P/CVE) and the founder of Women in International Security-HoA.

This article was originally posted on: http://www.worldpolicy.org/blog/2017/08/08/kenyan-approach-preventing-violent-extremism